I have always believe on equal opportunity between genders when it comes to driving. I mean, both males and females are responsible for poor driving skills that sometimes may result in bad accidents. However, since the incident that occurred to me last week, I felt that at times, women drivers are not that street-smart when it comes to driving after all.

Without prejudice to any party involved, I do concur that there are responsible and alert female drivers in Singapore but the one that I am mentioning below sure doesn’t fit into the equation.

Like any normal day, I drive to work every school day after sending my wife to work. I would take either of the 2 expressways towards Jurong and exit at Jalan Bahar to reach N/I/E. The stretch that lead from Jalan Bahar to the junction inwards would be very chaotic with the frequent jams outside caused by large trucks and SUVs heading to Civil Defence Academy.

Once you turn towards NTU, it will be a calm and peaceful ride before you turn right towards N/I/E area carparks. 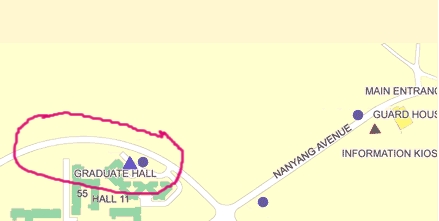 Last week however, was not like any normal days. After I made the right turn towards the graduate hall, I was driving within the speed limit (which was a ridiculous 40 km/h, that eventually turn out not to be so ridiculous at all). I remembered behind me were 3 other cars, all driving slowly, probably also due to the fact that in rain in the morning and the ground is wet. At the end of the inclination slope, I can see the free shuttle bus stopping on the other side of the two-lane road with hordes of undergraduates boarding peacefully.

From the amateur diagram that I have drawn up below, the driver of the car actually high beam his headlamps on me which in Singapore roads signify either of these 2 things:

2) At least let him pass through 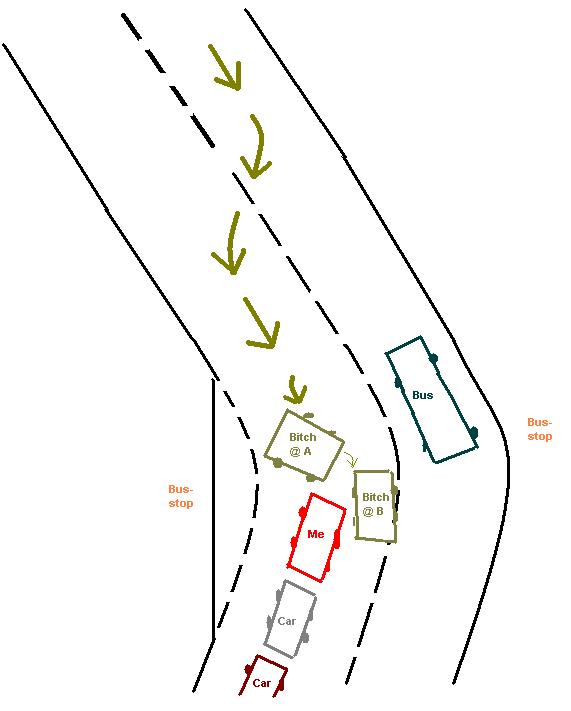 Based on the diagram, you can see my position as well as the stationary bus when he tried to beam to make the pass over the 2nd last straight green arrow. Sensing that I might not be able to brake in time, he hit the brakes with full force that his car skidded along the road to the initial position marked ‘A’ on the diagram and stop right in front me.

By that time, both sides of students waiting at the bus-stop had their eyes on the driver and that’s where I realised that the driver is a woman.

Of course, my initial reaction was fixed and stare blankly. At that time, I did not think of anything else except wanting to come back home and see my darling family one more time. I mean you would too, had you been in my position, about to get wham from the front and quite possibly from the back had the cars not stop in time. My second reaction however was anger and it was rather unexpected of me too.

As the woman driver regain back her composure and drove back to the position marked ‘B’, I wind down my window and she thought that I wanted to say something to her, so she wound her window down as well.

That was what I yelled at her using my CSM voice and quite possibly all my strength that I could gather. I think the students at the bus-stop even heard that too because some of them actually jolted from their positions when they heard me. I can still remember the shock on the driver’s face too when she got the brunt of me.

I mean, its not that you cannot overtake a stationary vehicle. That’s why I said back in the beginning that certain women drivers are not street smart when it comes to handling practical driving. It is simply because no sane man would overtake and drive at full blast speed over an incline slope on the OTHER side of the road without worrying that another car is probably up his way on the opposite side as well.

I doubt if I can recognise the woman driver if I happen to meet her again. But I guess, after she heard my voice that fateful morning, I hope that she would think twice of doing the same thing, again at the same road.

116 replies on “The one about a lady driver”

Love your reaction! Way to go!

This happens a lot at Jalan Kayu. Anyway, thank god u’re ok but i guess it made you badi for awhile hehehe.

Good for you bro! That woman deserves all that swearing. I would have done the same. Some people who have no brains shouldn’t be on the road.

@Zul, I would have too but I think to shout at the top of my voice, I can only think of 1 word that would have had the maximum effect on the whole situation.

The look on her face was just… priceless.

Not that I am ‘badi’ or what but sometimes, foolish drivers are dangerous drivers and the victim here are often the safe and smart ones.

Couldn’t agree with you more on this issue bro.

wahseh! wat a reaction. im not saying that im a superb driver but at least common sense will tell me NOT TO SPEED on an incline slope. bodoh nama nya tu… anyways glad that you are ok bro.

Thanks for your concern. I am sure you’re one of the exceptional quality female drivers out there 🙂