Sometimes, it irks me when people call me up and plead with me to fix their computer because:

– they forgot to do a backup of the files and the computer crashed OR
– they are running and important deadline and need the printer/scanner/keyboard/mouse/others to be up in a jiffy;

and when I reach there, only to be told that I was the 4th/5th/6th or worse, the last person that they turn for help, and its only because none of the previous ones were able to resolve it. Interestingly, the previous repairmen are actually not of the same race as that person.

While I’m not trying to be racist here, I sometimes wonder why they have the mindset that certain races are born to be a geek in an area while me, a Malay-speaking (though I’m an Indian), is always 2nd class when in this particular IT sector.

Of course, they must be living in a shell if they are not aware that Indians are pouring out of their native country by the thousands, all equipped with BSc / MBA / MSc / CBNT / CCA / CCDA / CCIA / CCIE / CCNA / CCNP / CCSA / CCSE / CISSP / CWAP and many more in this IT field.

To me, racial prejudice affects everyone. In as much as racial prejudice manifests itself in that people are â€œpre-judgedâ€ based on superficial characteristics, we must honestly conclude that all people â€œsufferâ€ from this on various levels.

When we donâ€™t know an individual well, we consciously or unconsciously begin to characterize him or her based on what we see. Again, this is due to our ignorance of the personâ€™s real character and personality. We will form opinions, often based along stereotypical lines: â€œall people of such and such race are. . .â€

We can fill in the blanks with such expectations that certain races are intellectually superior, others are full of avarice, another is more artistically or athletically inclined, still another has members who are apt to be dishonest, etc, etc. . . These ideas have been formed from society, media, and our own upbringing.

Maybe these ideas have been taught directly or indirectly, acted out by oneâ€™s parents. Whatever the source, even the most enlightened member of a society will find that to some extent, he or she is judging another based on the superficial aspects of race.

Ok so like whatever it is, I went to the customers house, because they said that the monitor shows an error: “No Operating System found.”

I asked the customer if the previous repair guys have dismantle and check the internal CPU connections. None.

I took the whole machine back home. And when I open it up, this is what I see. 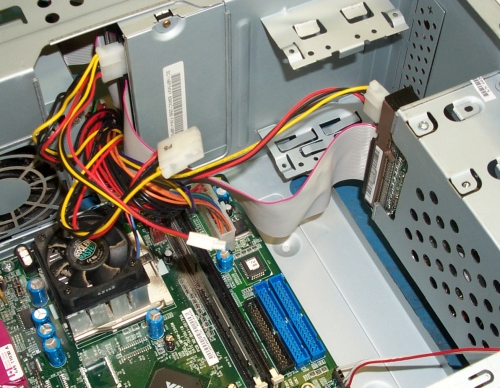 Please note the two blue sockets on the motherboard at bottom center. Note that these are the IDE controller sockets. Note the black socket next to them. That is the floppy drive cable socket. Note that there are no cables in ANY of them! Note the IDE cable going from the hard drive to the CDROM drive – and nowhere else!

And the customer spent $40 for each of the repair guy that came and did NOTHING. Pity him for being doped/con just like that.

I’m contemplating to charge the price based on a list found in alt.sysadmin.recovery:

dun wori ko bukan 2nd class.. u’re the best..
u are always 1st in my mind when it comes to these IT stuffs…
u give direct and precise answers… stret to the point… despite u being an indian.. (ooopppsss! jgn marah ah!)…

Ey .. not all indians like dat ar. These people are plain stupid. It’s because of Indians like Mama B yang buat orang pikiran cam gini lol

I got friends who call me only when they have computer problems too. Like, wtf, I haven’t seen you in years, and now you call me ’cause your computer got problems?

Those are worse… At least with customers, you get paid. 😛

i was wondering how that customer used that computer all these while… takkan comp tu still new and has no OS. but if its not new, then how did his cpu become like that??

Good thing I married you, Dy. No need to call any more computer guy. Ahakz. If no one else trust you with their pcs, at least, I do. nods nods

10q Big Momma for consoling me.

But Monyotmommy, its with people like him that makes us feel the zest to come to work and irk him, else worklife is pretty boring.

Yes Zul, in the end I charge him the same amount that he was being charged by the rest. Only this time, its working fine.

InblackNwhite, the PC is a Pentium 3 with 650 Mhz but having a Windows XP Service Pace 2 !! Hehehe. Imagine how fast it can go.

And yes my Dear, thanks for the trust being placed on me. 🙂