A couple of days back, after a rather tiring day in office, I drag myself up a feeder trunk bus service and plop myself on one of those seats facing the rear. A few stops later, a couple of passengers boarded the same bus, out of which, there were 3 individuals who made me fall into a dilemma.

The first one who came up was a young woman, probably in her teens, but carrying a baby in her arms, without any sling to support her.

The second, is a middle-aged guy whose right hand is being bandaged that was supported in such a way that his hand cannot touch his body or anything else for that matter.

The third individual, is an old woman. Old, wrinkly woman who tried to dress young, hip and trendy and was carrying two big paper bags label METRO and BHG.

The position that they stand in the bus is not very comfortable either. 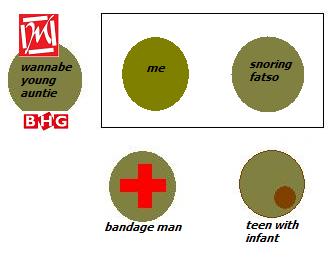 As you can see from the above, the person sitting next to me have apparently doze off to lala-land within a few minutes upon the bus traveling.

If you were me, which one would you choose to give up your seat to ?

I would choose the teen with the infant. Carrying babies would be hard, and i will purposely, budge the fatso, while i offer my seat to the young mommy…So he would wake up and see the scenario as well. =)

I agree with the above person…if auntie can go shopping, she can jolly well stand…man with bandage can use the other hand to hold whatever support there is…besides, he’s a man…

but on most daes, if i’m so freaking exhausted, i wld’ve been like de snoozing fatso..ahhaa

Even with my being preg and all, I would really feel obliged to give up my seat if I were to see a more deserving individual like an old person who looked like he/she just finished work and has no energy to stand on a concrete ground let alone to balance on a moving vehicle, a more heavily pregnant lady or someone carrying a baby.

As you know me, I don’t give a frigging hoot about those old ladies who carry shopping bags, with polished nails, heels and sunglasses and try to look pathetic for a seat. I’d give my seat to the teen with the infant, cos’ well, if the bus were to brake hard, the infant will feel the most pain if he/her were to fall, worse still IF some adult fell on him/her and all.

Katak, i would rather sleep/doze off in the bus rather than hoping and thinking who r goin to give their sits.. 😉